RP&T Centre
(Rapid Prototyping & Tooling)
1991 Graham Tromans was the first to be trained on the SLA500 in the UK. His role was to educate the engineers in the Rover Group and help them understand the benefits of using Rapid Prototyping and Rapid tooling technologies to save time and money and further application developments within the business. 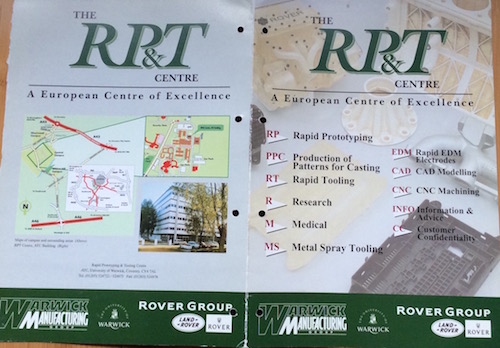 It was a year earlier that Graham was introduced to the SLA technology with the Rover front grill built by Lasercad on their SLA250 and this had to be split into 3 pieces and using the resin to glue them into one single piece. The early acrylic resin however was very brittle and Graham recalls how the grill pieces broke in his hand as he picked it up. This early prototype model cost Rover £10,000 as the project included stiching the CAD model into a surface volume as it was supplied only in wire frame and untrimmed surface information in CADDs 4X native format.

Graham realised very early on that the benefits of a large vat SLA was the way forward and using the SLA technology and incorporating them with Rapid Casting would allow engineers to have castings that could be used directly in prototype car development.

2002 Graham left Rover to become Rapid Manufacturing Consortium Manager at the Loughborough University, England. He presented International papers in the USA, Japan & Europe on the subject of RP, RT & RM (Rapid Prototyping, Tooling & Manufacture). The UK governments Department of Trade and Industry (DTI) invited and sent Graham to both USA and Japan as a member of OSTEM (Overseas Science & Technology Expert Mission) to study the state of the art of RP technology in those countries.

In 2003 Graham became Chairman of the Rapid Prototyping and Manufacturing Association, UK. As well as President of the European StereoLithography Users Association, In the same year he edited a book called 'Developments in Rapid Casting' that was published by the Institute of Mechanical Engineers.